November 05, 2012
The new Dart Editor build contains fixes for the Clean Up wizard, capturing screenshots for feedback, and even runs 'pub install' whenever pubspec.yaml file changes.

One of our favorite new features is the better type inference. The new build can recommend a union of declared and checked types for code completion. The screenshot below shows an example: 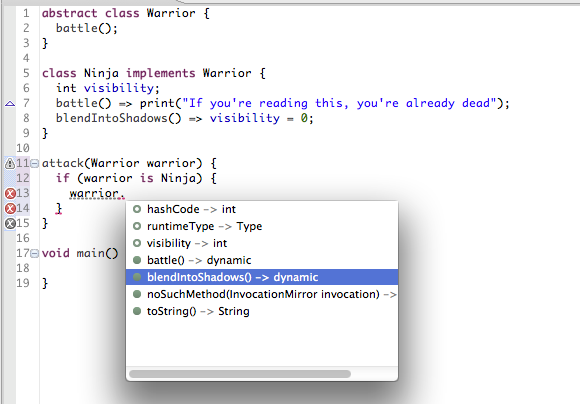 Notice how, inside of the if block, the editor presents options for warrior containing both the methods in Warrior as well as Ninja.

Eric Clayberg writes about the full list of changes in this build:

Breaking Change List:
And as always, view the changelog for the full list of changes, and to get started with the Editor see our tutorial.

editor news
Labels: editor news
This site is no longer being maintained.
For the latest Dart news, visit medium.com/dartlang.